Accessibility, travel and mobility are major issues for Brittany. It is for this reason, in January 2019, that the State and the Regional Council of Brittany proposed an Accessibility and Mobility Pact for Brittany with a firm and ambitious vision of the objectives to be achieved. This Pact extends, amongst other things, the commitments made for rail accessibility of Brittany such as:

A new westbound High Speed ​​Line was inaugurated on 1st July 2017. It allows trains to operate at a speed of between 300 and 320 km/hr, thus reducing the travel time between Paris and Quimper by 45 minutes.

The Quimper-Brest TER (Regional Express Train) link was brought back into service in December 2017 after a year of work to renew 70 kilometres of track.

The Brittany High Speed ​​project also relies on the modernization of the Rennes-Brest and Rennes-Quimper lines with the aim of prolonging the High Speed Line effect, shortening journeys and increasing circulation.

To support this project, Quimper Western Brittany, the State, the Region of Brittany, the Finistère County Council, SNCF Gares & Connexions and SNCF Réseau have embarked on a partnership approach to redevelop the Quimper Multimodal Exchange Hub. On Wednesday, 13th February, 2019, they signed a hub contract that formalises the scope of the project, its cost and its schedule.

Why a Multimodal exchange hub (PEM)

The redevelopment project of the Multimodal Exchange Hub (PEM) in Quimper is taking place in an unprecedented railway development dynamic for Brittany. This dynamic called Brittany High Speed ​​(BGV) is the major regional development project that aims to make Brittany more accessible, closer to Paris and with better internal links. This is the opportunity for the entire territory to gain in attractiveness.

The Brittany High Speed ​​project is built around the deployment of the LGV Bretagne-Pays de la Loire (the Brittany-Loire high speed line) that connects Quimper to Paris in 3hrs 31mins and 2 extra TGV roundtrips between Quimper and Paris. Travellers also benefit from optimized connections in Rennes.

The modernization of the rail link between Brest and Quimper has improved the accessibility of Finistère by efficient connections between Brest and the south of Brittany through to Nantes. It offers an additional service of train + coach. The high speed line (LGV) is accompanied by a strengthening of the Regional Express Train (TER) offer and TGV connections have been improved.

What is a multimodal exchange hub?

The multimodal exchange hub is a place of interchange and interconnection of different modes of travel: walking, two-wheeled vehicles, public transport (city buses and coaches), trains (High Speed (TGV) and Regional Express (TER)), taxis and personal cars. The multimodal exchange hub is the platform towards which all these means of transport converge. It allows users to choose their mode of travel by promoting inter-modality.

To anticipate and support the high speed link effect, Quimper Western Brittany, Europe, the State, the Brittany Region, the County Council of Finistère, SNCF Gares & Connexions and SNCF Réseau have embarked on a partnership approach in order to redevelop the multimodal exchanges (train - coach - bus - car - pedestrian and cyclist connections) in Quimper.

This approach has made it possible, in the framework of a preliminary study, to develop an organizational scenario, taking into account the urban, capacity, accessibility and inter-modality issues of the station area.

Meet the four challenges of the multimodal exchange hub

Capacity issue: adapt the station to an increase in traffic

The implementation of the High Speed ​​Line, the improvement of the rail network up to Quimper and the reinforcement of the TER offer leads to a sharp increase in the number of rail transport passengers (1.35 to 1.6 million by 2025 against 920 000 in 2016 for the rail network) as well as for public transport (1.15 million travellers in 2025 against 914 000 in 2014 for the bus station). In order to meet these developments and to welcome this new influx in the best conditions, the hub needs to be reorganized.

Intermodal challenge: promote the development of public transport and facilitate intermodal exchanges at the station site

The redevelopment of the Multimodal Exchange Hub is part of a sustainable approach and a fair balance between travel by public transport, active modes (pedestrians / cyclists) and private vehicles.

The project aims to provide good accessibility for people with reduced mobility. For this, the passenger building, the bus station, the railway platforms and all the outdoor spaces will be designed in such a way as to guarantee easy and comfortable accessibility for all. The challenge is also to promote rapid access to the station by different modes of transport (collective, soft modes, cars and taxis).

Urban issue: contributing to the overall development and development project of the station area: 765 Avenue

Called "765 Avenue", the urban project aims to enhance the living environment, to welcome a business park and to support the renewal of the housing on offer.

In 2018, Quimper Western Brittany launched a project management competition for the railway bridge, the urban development and the bus station. Three candidates proposed a project:

The community council of Thursday, 31st January, 2019 validated the choice of the prime contractor, the chosen project is the one proposed by the Agence TER, awarded in 2018 by the Grand Prix de l'Urbanisme.

The chosen project proposes a "Park in Movement" with a strong landscapes, giving the PEM a "Station Park" identity, while promoting intermodal exchanges and accessibility to the station. This new facility will prefigure the new face of the station district and its transformations. In a second phase, the 765 avenue urban project will continue the transformation of this neighbourhood.

The footbridge connecting the forecourt to the North car park is like a belvedere over the railroad tracks. Its rectilinear architectural vocabulary gives it a refined monumentality.

During 2019, rights-of-way clearing work will be undertaken, including the demolition of Sernam building and the wing of the passenger building.

A temporary public car park will also be created on the disused railway site for site organization requirements.

A new forecourt that opens up to the city; requalified public spaces 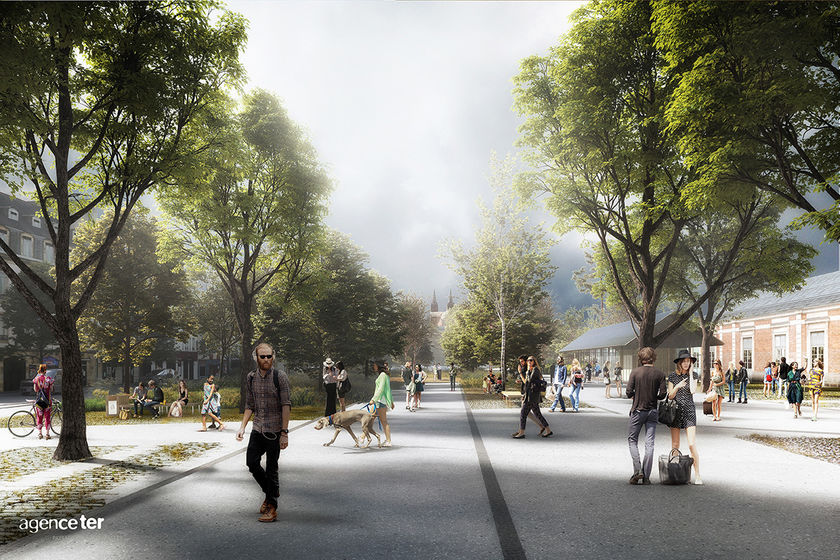 A large forecourt in front of the station will ensure better connectivity between different modes of transport and provide a new public space for travellers and residents.

These public spaces will allow a new comfortable for the circulation of pedestrians and cyclists arriving from the city centre, from the east of the district, from the south but also from the north. The station will open up to the city.

A pedestrian bridge over the railway tracks 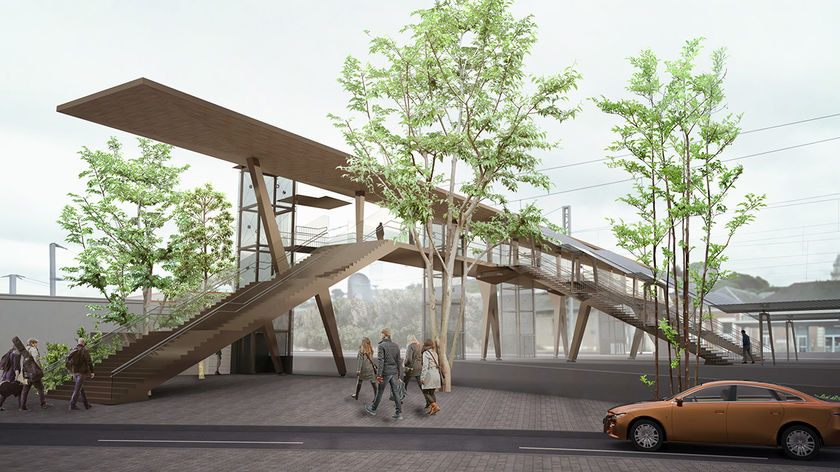 The creation of an inter-neighbourhood pedestrian bridge will serve the railway platforms.

It meets a requirement of accessibility for people with reduced mobility, by installing lifts at each end of the bridge and onto each platform. It will also optimize the use of the car park of the sports hall. Accessibility will be supplemented by several facilities and the current underpass will be kept and updated.

Redevelopment of the passenger building

It will be redesigned to increase and optimize passenger capacity, provide new services, improve accessibility, enhance passenger safety and ensure effective inter-modality with the bus terminal. The demolition of the wing of the passenger building will open the forecourt to the new pedestrian bridge, the future bus station and to the east of the neighbourhood that will be moved in the longer term.

85 short-term parking spaces will be located to the west of the passenger building. The new pedestrian bridge will provide access to the 335 parking spaces of the sports hall. The long-term car park will offer 135 parking spaces. The project includes the creation of a bike house with 50 secure parking spaces as well as bike stands on the forecourt. 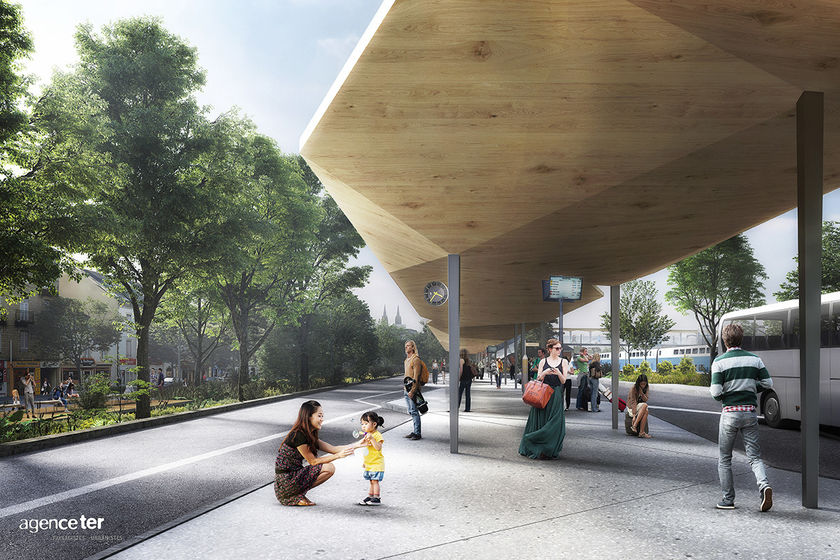 The project involves the creation of a new bus station. It will include 16 independent docks partially sheltered under a span of the Sernam Building. These will be for long distance coaches.

It will also accommodate taxis, positioned near the passenger building and the platform access bridge.

The schedule and the cost of the operation

The organization of the project management: Quimper Western Brittany designated unique MOA for the passenger bridge, urban development and the bus station; SNCF Gares & Connexions for the redevelopment of the passenger building; SNCF Réseau for the accessibility of the platforms and work related to the bridge.

The estimated cost of the project is 33.2 million euros.

It is funded by: